Below is a listing of our ministers and full time staff members. If you need to get in touch with one of our other staff members or lay leaders, please contact the church office. 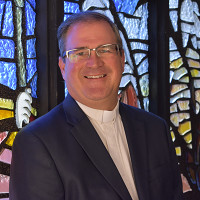 The Rev. Dr. Jonathan Doolittle has been serving Clairemont Lutheran Church / Iglesia Luterana since 1998, first as Associate Pastor and later becoming our Senior Pastor in 2008.

Originally from Columbus, Ohio, he received his B.A. in Psychology from Wittenberg University. After answering God's call to ministry, he received a Masters of Divinity and later a Doctor of Ministry from the Lutheran School of Theology in Chicago, IL.

Jonathan is married to Holly, and they have three children. He enjoys golf, good food, and attending his children's sporting events. 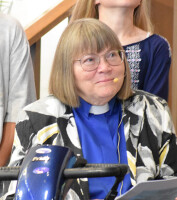 Pastor Cyndi is the newest member of our church staff.

Before answering God's call to ministry, Pastor Cyndi was the publisher of Mainstream Magazine. She is also an advocate for persons with disabilities and worked with the George H.W. Bush administration on the enactment of the Americans with Disabilities Act (ADA).

Pastor Cyndi is no stranger to Clairemont Lutheran Church / Iglesia Luterana Clairemont, having served our congregation once before as a pastoral intern.

She also serves as the Pastor for Disabilities Ministry in the Pacifca Synod of the Evangelical Lutheran Church in America. 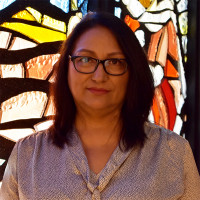 Vicar Elena has been a part of our community of faith for many years and has played an pivotal role in leading our Spanish language ministries as well as our fellowship and community outreach ministries.

Elena is a candidate for ordination under the ELCA's TEEM program and is currently receiving formal pastoral training and education while serving our congregation.

Elena is married to Jorge, and they have four children.

Dr. Steven Gray has been our Organist and Director of Music Ministries for more than two decades.

Additionally, Dr. Gray is a professor of music at Palomar College. He is married to Nancy, a retired music teacher, and they have two children. 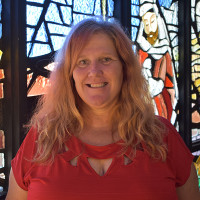 Angela Jackson has been a part of Clairemont Lutheran Church / Iglesia Luterana nearly all of her life. A San Diego native, she grew up in the church and continues to be an active part of many ministries.

As the Ministry Assistant for Administration, Angela handles all of the important behind the scenes details that keep the church running. She can also be seen regularly assisting with communion and Altar Guild, and also singing or playing the flute at worship.

Angela is married to Otha, and is a proud motorcycle riding grandma.